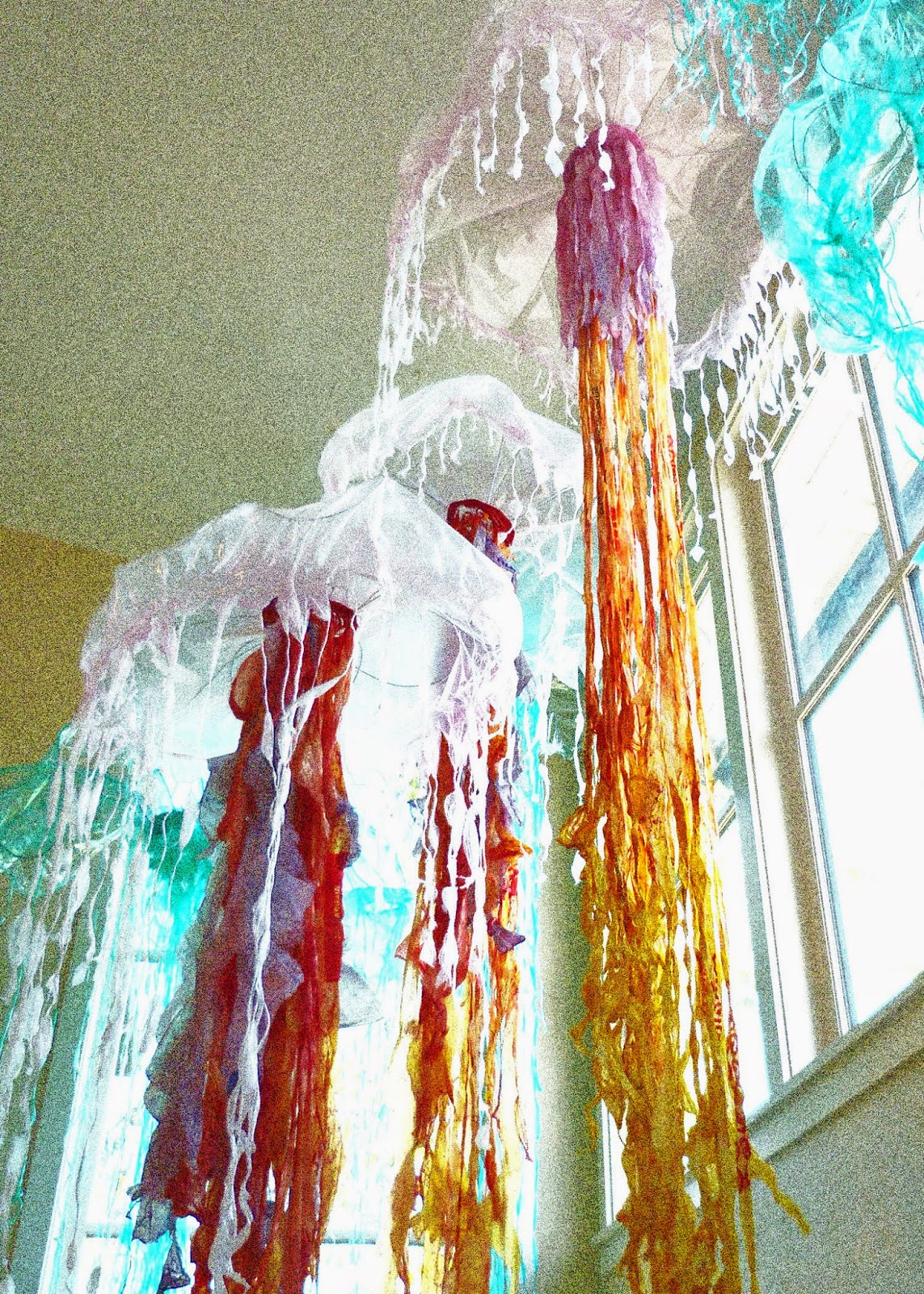 The project came from the brilliant & creative mind of San Diego Visual Arts Networks Founder Patricia Frischer. Ms. Frischer is dedicated to growing the arts community & creating collaborations with local business & science. The goal of the "DNA" project is to encourage collaborations between the arts and sciences, and to instigate innovative research and create positive change. For me part of the project was also documenting its process.

The team I was invited to join "Sea Changes: ACT!, is one of four teams, consisting of artists and scientists.  Their goal is to raise awareness for issues affecting our ecosystem, particularly our Oceans. Over fishing, plastic pollution, climate change and acidification.

Coming from a small island country like Ireland, you are always aware of the ocean.  It's part of everything. it's in the blood! The island itself is a bit smaller than the state of Indiana, and it's only 1 hour and 27 minutes drive from the center-most point of the country, near Athlone, County Roscommon to the coast at Blackrock, Dublin.

In an article I read in the NYTIMES about Ireland's PlasTAX they say "Plastic bags were not outlawed, but carrying them became socially unacceptable".  Introduced on 4th March 2002, according to the Department of the Environment the law had an immediate effect on consumer behaviour with a decrease in plastic bag usage from an estimated 328 bags per capita to 21 bags per capita overnight!  I'd love to see this happen everywhere. But of course it won't happen until we change something and I want to be part of changing something. 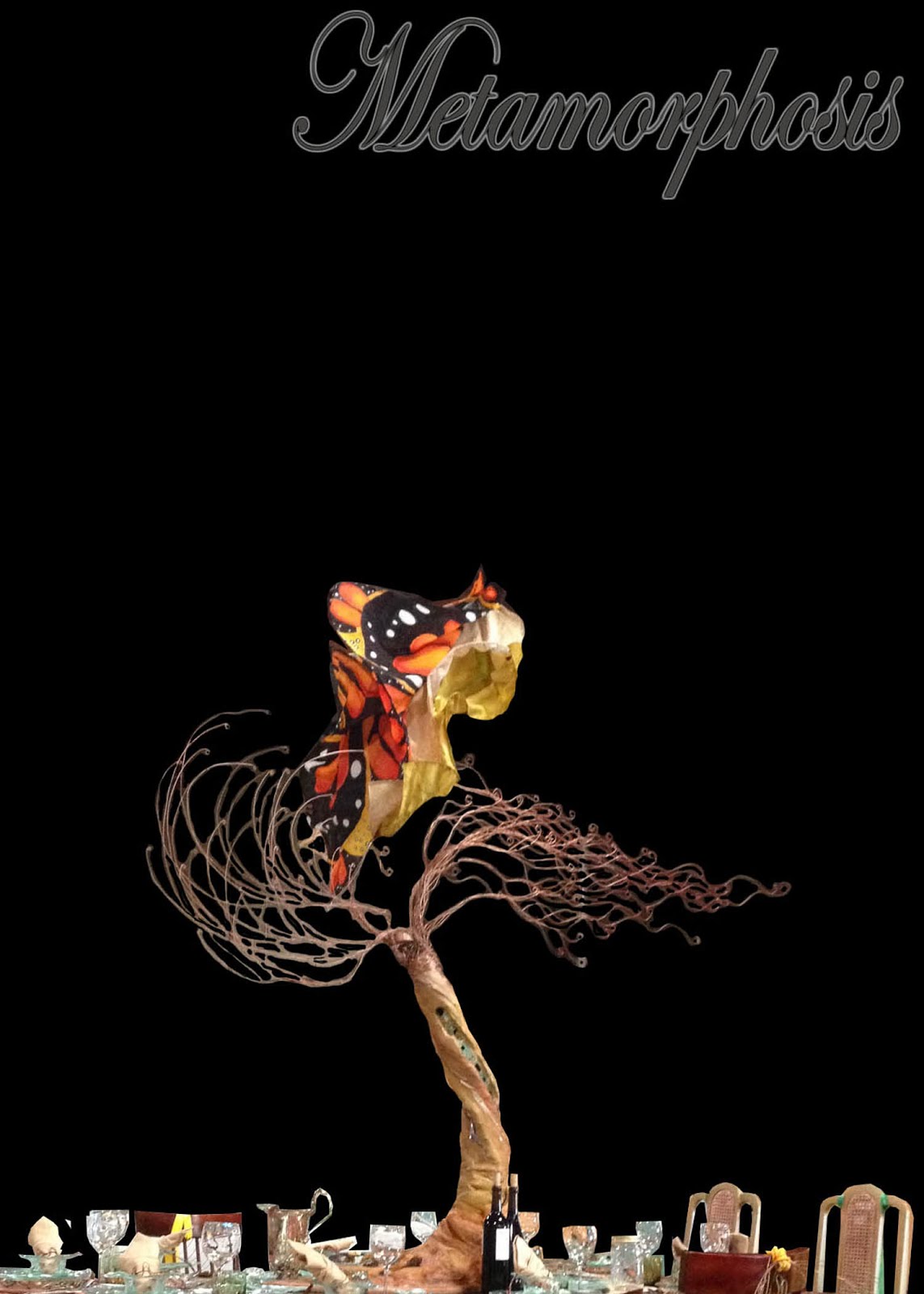 So I was delighted to say yes and take a deep dive into helping to bring awareness to the plight of our oceans. I believe artists can help create a paradigm shift in how people think. We have the ability to help people see something in a new way. I hope to bring a sense of connection with this project, to help people remember  they are part of the great circle of  life. That small actions repeated many times have an impact, that impact can be for our good or for our detriment.We have the ability to choose. I want to encourage people to make the effort.


Another reason I was so happy to say yes is because my good friend & talented local silk/glass artist Marjorie Pezzoli was also on the team. We created a hand painted silk sculpture together for a Feeding America (San Diego chapter) Fundraiser

Marjorie had been working on large scale silk paintings with Kira Corser, our Sea Changes team leader. Kira is also a multi faceted artists and produced beautiful hand painted silks,  photographs as well as a video for the project. Jellyfish are truly beautiful, ethereal almost magical looking creatures. Translucent as glass & every color of the rainbow. With frills and long tentacles and sometimes pulsating lights. These beautiful creatures en-captured our hearts, and artistic vision.

We discovered that juvenile sea turtles are carnivorous and survive on jellyfish. However they are ingesting increasing amounts of plastic in their diet.

We discovered that on Midway Atoll, 2000 miles from the nearest continent, the albatross feeds its chicks plastic bottle tops, razors and garbage bags until it dies of malnutrition.

How much more do we need to see before we stop what we're doing?
We discovered there is a larger than normal bloom of jellies happening in our oceans.
Scientists are wondering "Why is this?"

There is an indication that their spread is human-based, although some scientists have argued that the blooms are part of a natural cycle. If the blooms are human-caused, there are several probable culprits... including overfishing, extra nutrients from fertilizer run offs, climate change & ocean sprawl.

My mind started working on how it might be achieved. The first idea I came up with was using a wire frame with silk over it. then airbrushing with color. This idea was discarded for a few reasons, 1,  Silk is expensive,  2, Silk is not clogging up the ocean. 3. This would involve a lot of sewing and the biggest issue for me was 4. it is not translucent enough. 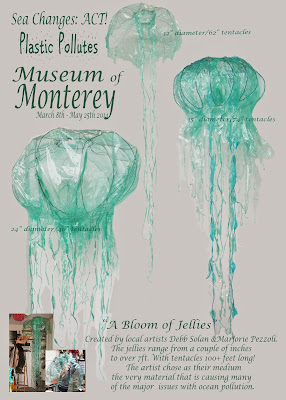 The next idea was to use a couple of mosquito nets I had hanging around the studio. The netting is more translucent than the silk,  and seemed like it would communicate the idea of jellyfish better.

At 3am one morning while I was working in the studio I remembered the beautiful green jellies I had seen online that day. My mind immediately went to the large roll of green cling wrap my friend Jeff Mills had donated to a previous project. The connection came in a literal flash and I instantly felt it's perfection. It communicated aspects of the project the silk could not. I felt this was an elegant solution of which any scientist would be proud.

I sat in my studio and worked on a sample to show Marjorie the next day. I wasn't sure what her reaction would be! I waited all day for her to stop by after work. I had the green jelly sample and the big roll of green  plastic out on the table... and the pictures of the "green jellies" ready.


I didn't need them! Marjorie was as delighted with the idea!


I decided to do the tentacles, by spiral cutting plastic bags to create really long wavy pieces. To get the plastic to hug the frames I utilized another item donated to the studio by our friend Jeff. A heat gun! It was perfect for forming the body around the wire frame. The bodies are airbrushed to add color. Marjorie used all kinds of cutting techniques to create the miles and miles of tentacles we needed. 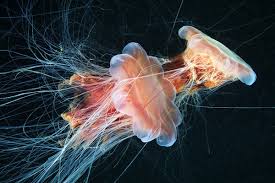 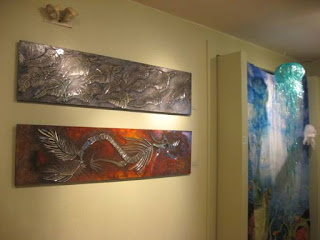 I was greatly inspired by Alexander Semenov's photographs of the majestic lion's mane captured in the crystal clear waters of the White Sea. With caps as large as 8 feet in diameter and tentacles reaching 130 feet long, the idea of creating this magnificent beast captured my imagination. I also referenced his photos for color and anatomy. 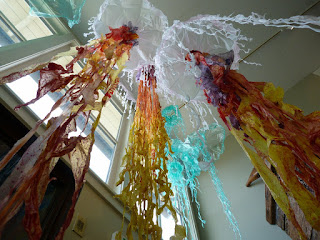 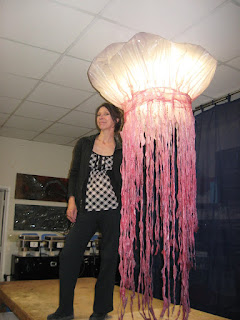 Our intent is to bring a visual aid to the scientific research.
It is pitiful to see the ever increasing number of juvenile sea turtles dying because they ingest plastics. The juvenile sea turtles eat jellies until they reach maturity at age 4 years. At which time they become herbivorous.

Many of these photos were taken during the installation process in the Museum of Monterey between March 6th 2014 and March 8th 2014. We drove up the coast on a mini adventure that turned out to be epic.

Kira Corser our team leader was a joy to live and work with. Her motivation to do good comes from deep within and is born of the trials and tribulations of a life that would have knocked some of us to the ground. But not Kira. She took it all as a challenge and forged ahead with a heart full of love for humanity and a dedication to leaving this planet a better place. Her knowledge and experience were our guide on this adventure and we couldn't have asked for a better mentor. Thank you KIRA for your beautiful big and loving heart, and for your wisdom ♥

& to my team mate Marjorie Pezzoli for her motivation, her dedication, her brilliant ideas, her creativity and her willingness to do what it takes to get the job done! oh yeah... and her awesome sense of humor.  That really helps at 3am when you have a whole sea of jelllies still to create! 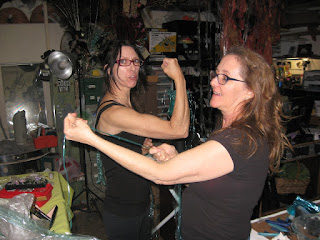 Together We have become known as "the Jellygirls"
the link will take you to a very sweet website built by Marjorie where you can find all the latest info on "the Jellygirls" and the "Jellies Forever" project.


The jellies are on a roll, they have now been shown at a number of different places including:
Museum of Monterey.
The Monterey Convention Center/ First Night Monterey,
NOAA Exploration Center
Oceanside Museum of Art.
The Living Coast Discovery Center
Fusionglass Co
BroAm Del Mar

Everyone we have been involved with in any aspect of this project has been unbelievably helpful, enthusiastic, friendly and knowledgeable. Their willingness to assist in any way to facilitate the installation of this project was more than we could possibly have expected.  As always the people you meet and interact with are the most important aspect of a project. We couldn't have asked more anything more!
Thank you all from the bottom of our hearts! 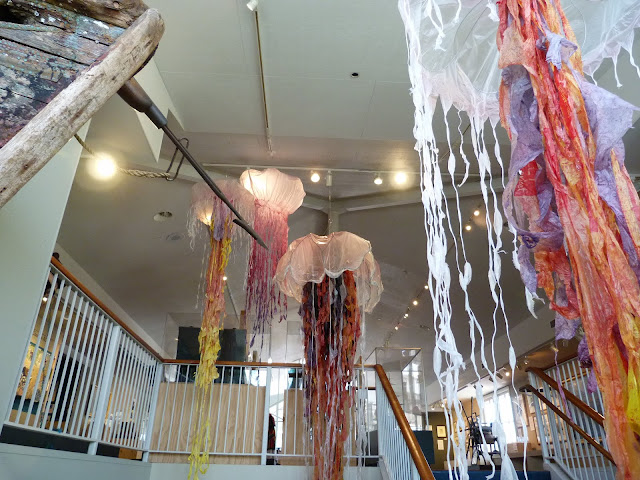 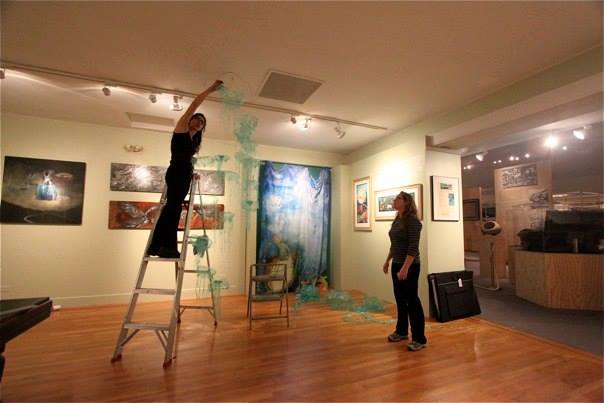 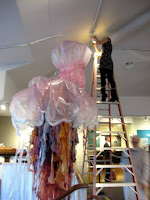 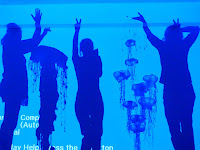 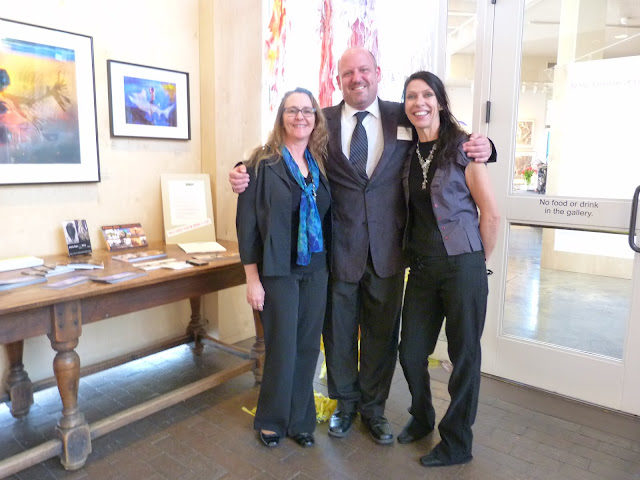 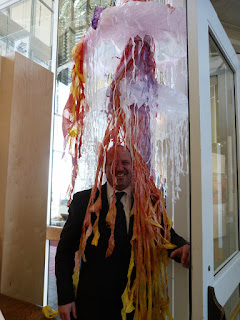 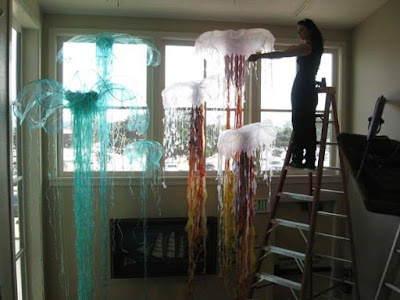 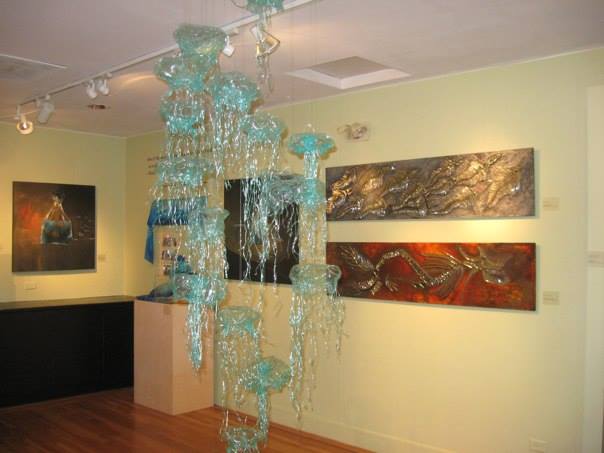 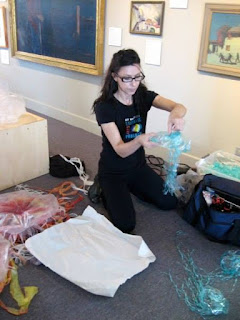 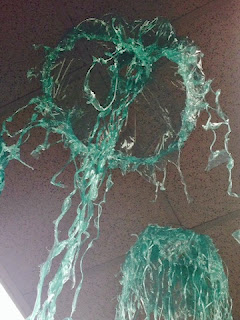 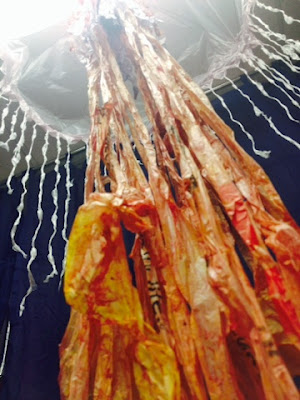 Why are jellies becoming more common around the world? It seems likely that their spread is human-caused, although some scientists have argued that the blooms are part of a natural cycle. If the blooms are human-caused, there are several probable culprits.
OVERFISHING Over the past two decades, between 100 and 120 million tons of marine life have been removed from the ocean by fisheries each year on average. A lot of these marine species, including fish and invertebrates such as squid, eat some of the same food that jellies do: mainly, zooplankton. As these other predators of plankton are fished from the sea, jellies have less competition for food, and are able to grow and reproduce with fewer limits.
NUTRIENTS When fertilizers runoff from the rivers to the seas, they can create dead zones: areas of ocean where little life survives. The nitrogen and phosphorus in fertilizer helps phytoplankton grow very quickly, and there can be so many of these single-celled plant-like animals that they deplete oxygen from the water. Most animals can't survive in these conditions, but many jellies can better tolerate low-oxygen environments.
CLIMATE CHANGE The ocean is warming, and this might give some jellies a boost. The warmer water could help jelly embryos and larvae develop more quickly, allowing their populations to grow more quickly. And jellies that prefer warmer water will have more area to live in. However, this could also hurt some species as cold-water jelly species see their habitat shrink.
SUBMARINE SPRAWL Many industries, such as shipping, drilling and aquaculture, build docks, oil platforms and other structures in the water—sometimes referred to as “ocean sprawl"—which can serve as nurseries for jellyfish. To undergo their polyp stage, jellyfish need solid surfaces to settle upon. It’s much easier for jellyfish polyps to attach to man-made structures made of wood, brick and concrete than sand. Ocean sprawl provides more and better habitat for jellyfish to reproduce and complete their lifecycles.
Posted by The Idea Field at 11:27 PM No comments: